skip to main | skip to sidebar

Rona and I are heading to Washington, DC, this weekend so I can play in the 45th anniversary alumni rugby game at American University.  This in itself is a somewhat astonishing development.  For nearly 20 years, I have made no attempt to stay in touch with, or reconnect with, anyone from my past.  There is a fairly simple reason for this- when I left high school, and subsequently college, I never really got the impression that anyone cared.  Or even knew that I left.  Or even noticed I was there.
Also, I pretty much assumed this was how it worked.  Life goes in phases, one ends, another begins.  Who really has time to keep track of all of those relationships?  As it turns out, lots of people.
Even more stunningly, turns out there was a whole bunch of people out there who did notice I was there, took note of my leaving, and wondered what the hell ever happened to me.  And all of these revelations came to me via a single source:  Facebook.  Got me 155 friends on there, yessir, and most of them are from high school and college.  Not an earth shattering total, I realize, but for a 42 year man carrying around all of the assumptions laid in out paragraphs 1&2, none too shabby.
The most surprising part is that the only one surprised is me.
Posted by Rick Sharp at 6:17 AM No comments:

One Day in an NFL Owner's Office

GM:  Hey boss, I wanted to talk to you about this player who is coming off suspension.  Here’s a little fact sheet I put together. (hands sheet to owner)

Owner:  Hmm…..led his team to a couple of NFC title games I see.

Owner:  I see here he did some prison time.  What’s that all about?

GM:  Yeah……well it seems he liked to do a little dog fighting.

Owner: So he had a dog and he would set up fights with other guys dogs?

GM: Well it was a little more involved than that.

GM:  Well, he kind of set up a whole operation, if you want to call it that.  He bought some land, built a house, build a bunch of out buildings to house and train a whole of bunch of dogs, hired some friends to run it, actually named it and everything .  “Bad Newz Kennels” he called it.  But it was kind of funny because he spelled news with a “z” at the end instead of an “s”.

Owner: So you could say he was head of a pretty substantial criminal organization, kinda like Tony Soprano, right?

GM: (chuckling) Yeah, I suppose you could say that.  They should have filmed if for a reality show.

Owner:  Sounds right up Spike TV’s alley.  Sounds like lots of people do this, what’s everyone so upset about?

GM:  Well the shit really hit the fan when some of the details about what went on there got out.

Owner:  People were surprised to find out dog fighting was violent?

GM:  There was a little more to it that that.

Owner: Jesus Christ, Tom, what do I have to do to get the whole story, torture you?

GM:  Funny you should mention torture.  Turns out, when a dog didn’t turn out to be such a great fighter they would “dispose” of them in some not so nice ways.

Owner:  Not so nice?

GM: Oh, well, you know,  swinging the dogs by their tails and smashing their heads into large rocks, holding their heads in buckets of water to drown them, hanging them from trees and beating them to death, nasty stuff.

Owner:  Yikes.  Anything else?

GM:  Umm….well apparently when there were no dogs to torture or dog fights to go to, they would amuse themselves by putting untrained house pets in with the fight dogs and watching them get torn apart.

Owner:  Wow, pretty sick dudes.  The player didn’t do any of this stuff personally, did he?

GM:  Well, turns out he did.  That part was kind of confusing though, because in court under oath, he said he didn’t.  It didn’t come out until much later that he actually took part in the killings.  He changed his story after his buddies ratted him out to the grand jury.

Owner:  Well I gotta wrap this up.  Playing golf this afternoon.  To summarize, you want me to consider signing a player that set up a dog fighting operation, oversaw and participated in the torture and murder of defenseless animals, and then perjured himself initially before finally admitting it?

GM:  Jeez, when you say it like that it sounds terrible.

GM:  Well it’s possible he may have embezzled some money from one of his companies.   But that hasn’t been proven, and you know what they say.

Owner:  I think I am going to have to pass on this one, Tom.

Owner:  One other thing, Tom.   For even suggesting I hire that sick, twisted animal to be the face of my franchise,  you can clean out your office and get the hell out of my building.

At least that’s how I hope it goes, 31 times in 31 owner’s offices.  If you read the details of what went on without Mike Vick’s name attached to it, it sounds pretty ridiculous that anyone would even consider signing him, doesn’t it?

Welcome to my blog 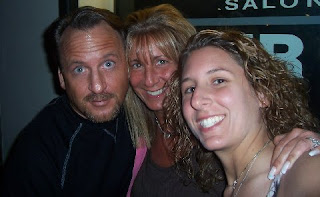 Yup, this is it.  My blog.  The title "Since No One Asked", says it all.  When someone says to me "who asked you", I've always replied "if I waited for someone to ask me, I would never get to say anything".  I have no illusions as to why I am so infrequently asked my opinion:  my opinions are seldom very much fun.  Snarky, a little sarcastic, and much more long winded than they probably need to be, certainly.  They also tend to be thought provoking and sometimes just generally provoking.  I will say in my defense that I save my strongest opinions for only those things about which I consider myself well informed.
WOW- that paragraph makes me sound like an asshole.  I'll try to mix in some lighter stuff, too.  Stay tuned.
Posted by Rick Sharp at 12:42 PM No comments:

Me and My Girls

Rick Sharp
Jackson, New Jersey, United States
Consultant, rugby player, libertarian. Crunchy on the outside, soft and chewy on the inside. Follow me on twitter @ ricksharp917